When we have music as part of our lives.

I recently returned from a trip “way on down south” where I had the opportunity to walk part of the New Orleans Mardi Gras Indians Super Sunday parade with R&B legend Dr. John. I must have been in the right place at the right time. 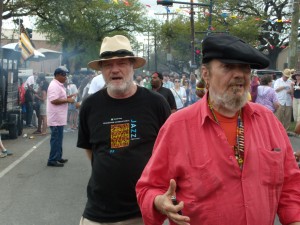 with the good Doctor at the Super Sunday parade

The parade is a great cultural and musical event, and this year was no exception. The Hot 8 Brass Band was the featured brass band, and they had the second line rockin’ in rhythm through the Central City neighbourhood.

Events like these are a reminder of how important music is to the health of a society. I have been privileged to have attended Carnival in Santiago de Cuba and now Super Sunday in New Orleans. Both cities are, by North American standards, poor. But, their rich, vibrant, and most importantly, living musical cultures make them healthier societies than many places that have “more”. What they lack materially is more than made up with the sense of community that much of our modern world has shunned.

Next year Carnival in Rio?

This entry was posted in Uncategorized. Bookmark the permalink.